Is the tattoo artist's make-up line offensive? Enough people think so to see it pulled from shelves 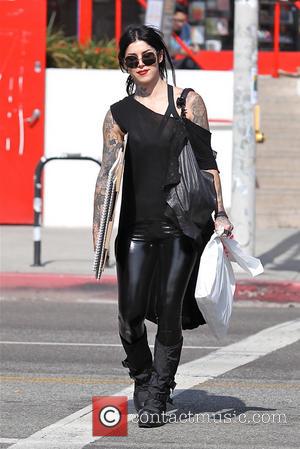 Tattoo artist and reality star Kat Von D has fallen out of favour with make up brand Sephora, who have dropped her product line from their stores following a public backlash to her line. Kat has come under fire for some of the names used to describe the Sephora collection, prompting them to drop the tattoo artist from their rooster.

Kat's collection was supposed to be an “inspiring makeup collection” that “exemplifies the fusion of glamorous, old Hollywood and edgy rock 'n' roll," according to the cosmetic retailer's website, however it has done quite the opposite. In particular it is her lipstick, called Celebutard, that has stirred up controversy. The title may live up to the "edgy" description, but edgy doesn't have to mean offensive, which is exactly what a number of people have thought about the particular item.

"People with disabilities are the last to benefit from what some might call ‘political correctness,’ and what I would call basic human decency,” Kim Stagliano, managing editor at Age of Autism, said in her HuffPost Style blog. “Retard is still bandied about.”

Who was Kat's latest celebrity canvas?

Taking the situation into their own hand, Sephora have decided to drop the entire collection from their shelves and issued a statement apologising for any offense caused. The statement said, “It has come to our attention that the name of one shade of a lipstick we carry has caused offense to some of our clients and others. We are deeply sorry for that, and we have ceased sale of that shade both in our stores and online.”

Kat responded to the furore in her own way, taking to Twitter to write “at the end of the day, it’s just a f*cking lipstick,” before later deleting the tweet. We're going to guess that she wasn't too bothered about causing offence. Kat Von D wasn't to regretful at causing any offence

Kat Von D Walks To Her Car In Hollywood