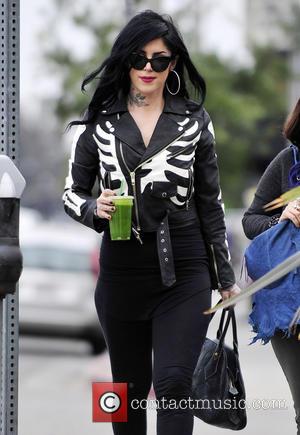 Celebrity tattoo artist Kat Von D has pulled out of two more book signings as she battles a mystery illness.

The star axed an appearance at a Barnes & Noble store in Dallas, Texas at the last minute on Tuesday (23Apr13), citing "sudden" illness, and now she has cancelled more promotional events as doctors have banned her from flying.

Von D has scrapped signings in Las Vegas on Wednesday (24Apr13) and Portland, Oregon on Thursday (25Apr13), but she hopes to resume promotional duties for her latest book in Los Angeles on Saturday (27Apr13).

A post on the star's Facebook.com page reads, "Kat has not been medically cleared to fly. The Los Angeles event on Saturday will happen. We are so grateful for the support and well wishes!"

Kat Von D Walks To Her Car In Hollywood