Beckinsale 'Proud' Wiseman And Sheen Get Along 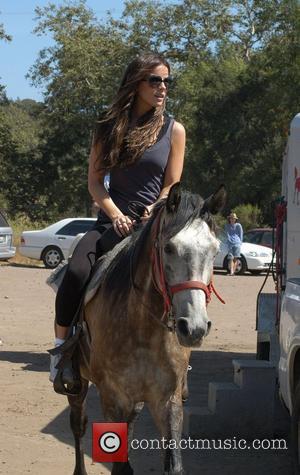 Picture: Kate Beckinsale takes her daughter for a horse ride in Malibu before running out of gas on the highway Los Angeles, California - 22.06.08

Actress Kate Beckinsale has praised her husband Len Wiseman and the father of her child Michael Sheen for not letting their pride interfere with the welfare of her daughter LILY.
The English beauty had Lily in 1999 while she was in a relationship with her Underworld co-star Sheen - but she ended their longterm romance in 2003 after falling for the vampire film's director Wiseman.
Beckinsale and Wiseman married a year later (04) and they now live in Los Angeles with nine-year-old Lily.
And the 34-year-old is glad both she and Wiseman have remained on good terms with Sheen, because it means her daughter can enjoy the best of both worlds with her parents.
She tells Britain's OK! magazine, "I've been very lucky to have two marvellous men in Len and Michael, they've got no awkward feelings about parenting Lily and working things out.
"It's so sad when adults can't find it in themselves to get along for the sake of a child. I'm very proud of both of them that they haven't let any potential awkwardness or strangeness affect our little family. I kknow some women who aren't so fortunate and whose children suffer as a result."