Kate Bosworth is obsessed with 'Top Chef' and 'Chopped' and loves creating dishes from the shows. 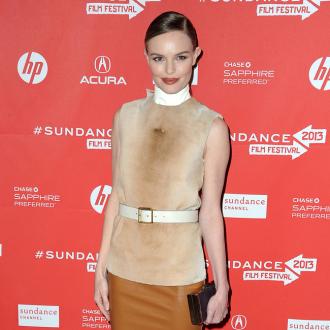 The 30-year-old actress is obsessed with whipping up dishes and gets her inspiration from 'Top Chef' and 'Chopped'.

She told People magazine: ''I love all of the cooking shows like 'Chopped' and 'Top Chef'. I've just started to learn in the last couple of years and I love it. My specialty is a sausage ragu, it takes about six or seven hours to cook. That's almost my mini-vacation, cooking with my fiance Michael [Polish] and his daughter and just having family time.''

Kate was previously in relationships with Orlando Bloom and Alexander Skarsgard before she romanced Michael.

The pair met on the set of 'Big Sur' - based on the autobiographical novel of Jack Kerouac - which the actress stars in and Michael directs.

Kate also revealed she was completely star-struck by Daniel Day-Lewis and Sally Field.

The 'Blue Crush' star bumped into the 'Lincoln' actors after an Oscars party earlier this year and was completely in awe of them.

She said: ''When my fiance and I were leaving the Vanity Fair Oscars party we were waiting in line for our car with Sally Field and Daniel Day-Lewis. Watching their work is like watching acrobatics.''