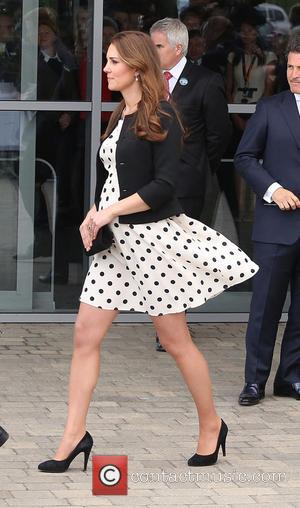 Kate Middleton has made her last appearance performing Royal Duties before the birth of her child, due next month.

The wife of Prince William visited Southampton yesterday (13 June 2013) in order to christen the cruise ship, the 'Royal Princess', named for the soon-to-be mother. She is the ship's godmother, a tradition dating from the 18th century, this is an honorary role reserved for important and deserving women.

Middleton was honoured by Alan Buckelew, President and Chief Executive Officer of the cruise company, describing her as 'an inspiring ambassador for Britain' who 'is admired around the world for her style and grace, and for her compassion for others', in a speech reported by The Huffington Post.

At 8 months pregnant, the Duchess of Cambridge glowed as she toured the vessel and met the crew, even acquiring a quick sailing lesson from the Captain in the bridge. The Princess appeared wearing a Dalmatian print dress from high-street store HOBBS. Following the release of images of the Princess online, Hobbs' online site was inundated with shoppers and within minutes the £169 dress was completely sold out.

Rumours continue to circulate regarding the Royal pregnancy. The latest concerns Kate's possible use of hypo-therapy during the birth. In January, Marie Claire reported Her Royal Highness had visited a hypo-therapist as a means of combatting her morning sickness (which left her hospitalised during her first trimester). It remains unconfirmed if hypnotherapy will be used, if she chooses this method she will be following in the footsteps of other celebrity mums including Jessica Alba. However, Buckingham Palace remains silent on the matter, informing the press that 'some matters which should remain private to the duchess'.

The occasion marked the Princess' last Royal appearance until the birth of her child.