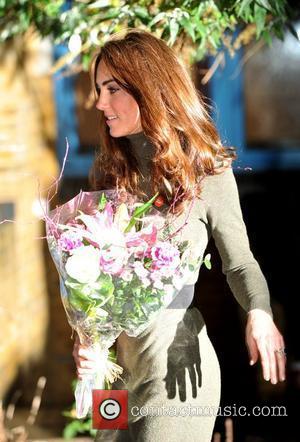 Kate Middleton, the Duchess of Cambridge, celebrates her 30th birthday today (January 9, 2012). She stepped out in style last night at the London premiere of Steven Spielberg's War Horse, which raised £300,000 for Prince William and Prince Harry's 'Forces In Mind' charitable foundation. Yesterday, the Daily Mail reported that the Duchess of Cambridge will "make a touching tribute to her husband's late mother, by becoming head of Princess Diana's old Army regiment," the Princess of Wales' Royal Regiment.

According to a report in The Mirror, Kate wore a floor-length, black lace Alice Temperley dress as she walked along the red carpet with her husband, Prince William, shielded by an umbrella to protect them from the London rain. Among the other stars gracing the red carpet were the film's principal stars, including Benedict Cumberbatch, Jeremy Irvine, Emily Watson and David Thewlis. A more unusual guest at the premiere was the 'War Horse' himself, otherwise known as Joey.

Last week, it was reported that Kate Middleton was planning a quiet, low-key celebration for her 30th birthday, contradicting an article in Grazia magazine that suggested her sister (Pippa Middleton) and brother-in-law (Prince Harry) were in fact planning a lavish, '80s themes party for the Duchess. Last year, Kate married Prince William in a lavish, televised wedding ceremony which was viewed by over 24 million people.