Kate Moss enjoyed working wit Mario Testino on the campaign photography for her new role as the face of shoe brand Stuart Weitzman. 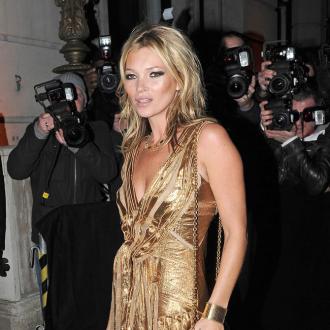 Kate Moss had a lot of ''fun'' working on the Stuart Weitzman campaign.

The 38-year-old supermodel is the new face for the upmarket shoe brand and was delighted to pose for the campaign, which was shot by acclaimed photographer Mario Testino - who recommended the British beauty for the job.

She said: ''I had a great time shooting the Stuart Weitzman campaign and I'm so happy to be face of the brand this season. Working with Mario Testino is always fun and it was wonderful meeting Stuart on set.''

The black and white images show Kate in several sexy poses, with one of her sitting on a stool wearing an unbuttoned white shirt, black high-waisted underwear, and a pair of shimmering silver court shoes, while in another, she sits cross-legged wearing a black top and white flat sandals.

As well as print and billboard advertising, the campaign will be boosted by a behind-the-scenes video of the shoot, which will launch on the Stuart Weitzman website in spring 2013.

The campaign marks the first time Kate has fronted adverts for an American shoe designer.

She replaces Natalia Vodianova as the face of the brand, following the Russian model's two seasons with the company.