Supermodel Kate Moss Is Due To Star In The Film Version Of Hit Tv Series Absolutely Fabulous, According To The Show's Star And Creator Jennifer Saunders. 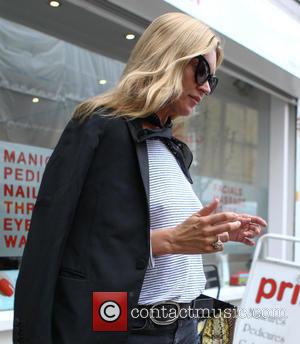 Picture: Kate Moss - Kate Moss leaves a nail salon in London after treating herself to a manicure at Primrose Hill - London, United Kingdom -...

Saunders, who played Edina Monsoon in the much-loved British comedy show, told the U.K.'s Daily Mirror newspaper that Moss will "definitely" be in the movie, which will start shooting at London Fashion Week next month (Sept15).

It has been revealed that Saunders' character, along with Patsy Stone - played by Joanna Lumley - will hit the catwalk with several supermodels in a similar filming stunt to Ben Stiller and Owen Wilson's debut at Paris Fashion Week in March (15) for Zoolander 2.

Speaking at a fashion event in London on Thursday (27Aug15), Saunders said, "I can confirm that Kate does have a part in the forthcoming movie. It's not yet decided whether she'll have a speaking part or not, but she'll definitely be in it. She's a big fan of the show and we're pals, so - aside from the fact she's the definitive model - it was a no-brainer.

"There'll also be a bit of Spice with Emma Bunton and Lulu, obviously. I'm still tweaking the script. I've only just got the greenlight. I'm trying not to overegg it."