Kate Moss had an Â£80,000 Banksy painting stolen from her home in London following an early morning burglary. 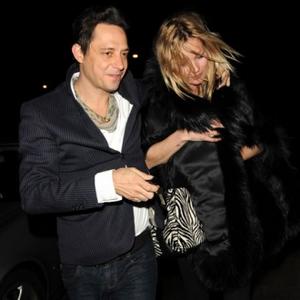 Kate Moss' home has been burgled.

The supermodel was asleep in her home in Maida Vale, London, when the raid happened at 4am yesterday (20.05.10).

Raiders took a Banksy painting worth Â£80,000 from the house, where her boyfriend Jamie Hince and mother Linda were also sleeping, as well as two other artworks.

A spokesperson said: "They got in by climbing over the back fence but fled after disturbing someone who woke up. There is a possibility that they had inside knowledge of the house's layout."

A Metropolitan Police representative said: "Camden Police are investigating a burglary at Greville Road, from approximately 4.20am on Thursday May 20. A 24-year-old man has been arrested in connection with it and inquiries are ongoing."

The gang fled when someone in the house - believed to be Jamie or Linda - disturbed the raid.

The robbery happened soon after Kate had launched her 11th range of clothes for Topshop, where she attended a party with celebrities including Nicola Roberts, Alexandra Burke and Anna Wintour.