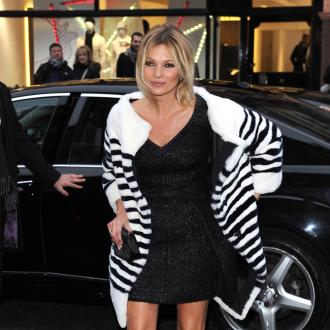 The 41-year-old supermodel is set to appear as herself in the movie version of the award winning BBC comedy series that saw characters Eddie Monsoon - played by the show's writer Jennifer Saunders - and Patsy Stone (Joanna Lumley) live in a boozy world of fashion and PR.

Jennifer, 57, revealed: ''I can confirm Kate does have a part. It's not yet decided whether she'll have a speaking part but she'll definitely be in it.

Kate is friends with the ''sweetie darling'' actress and appeared in the series in 2012, so Jennifer thinks it's a ''no brainer'' that she's joined the cast.

She told The Mirror: ''She's a big fan of the show and we're pals, so aside from the fact she's the definitive model, it was a no-brainer. There'll also be a bit of Spice with Emma Bunton and Lulu. I've only just got the green light so I'm tweaking the script and I'm trying not to over-egg it.

An insider told The Sun newspaper: ''Jennifer is desperate to keep things under wraps but landing Posh will be a big coup.''