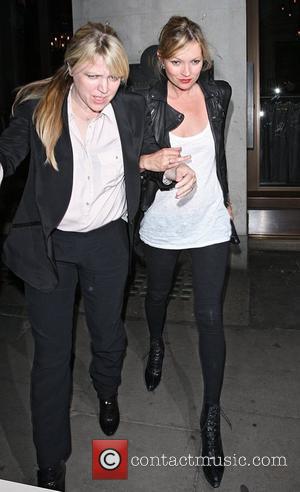 Picture: Kate Moss leaving The Wolseley in a black leather jacket and ankle boots after having dinner London, England - 22.07.10

Supermodel Kate Moss is stepping down from her design position at Topshop after three years creating fashion lines for the British retailer, according to a U.K. report.
The Brit beauty has pulled in a reported $4.5 million (£3 million) for her best-selling clothing ranges but has decided to end her partnership with the chain's boss, Sir Philip Green.
Fashion tycoon Green has dismissed reports the split was sparked by a feud with the model, insisting Moss will leave the brand to pursue other projects.
Green says, "There have been no dramas and we don't need a new muse. There is only one Kate and we are not looking for a replacement.
"Kate has done 14 collections with us. It has been fantastic for us and fantastic for her, but they take more and more time and she cannot do this full-time any more because she has other commitments."
Meanwhile, fashion insiders claim the move comes after disappointing sales of Moss' latest creations.
A source tells Britain's Sunday Times, "Kate Moss' range has not been selling at the same rate that it was and was in danger of running out of steam. At one point, she was doing six collections a year but they cut it back to two a year because they could not sustain it and that is when it started to falter."
The 36 year old will unveil her 14th and final collection for Topshop in October (10).