Kate Upton claims she doesn't make enough of an effort when she's travelling and needs to dress less casually. 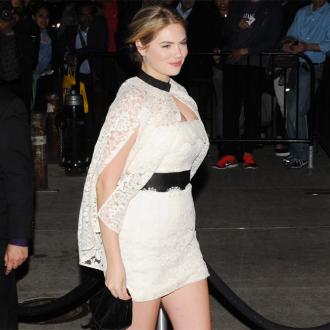 Kate Upton thinks she needs to up her fashion game for the paparazzi.

The 22-year-old model says she doesn't make enough effort when she's travelling and has vowed to stop wearing her pyjamas in public.

Asked if she had any fashion regrets, she said: ''Sure, I do. I think it's usually when I'm coming off of a plane. That's where all the paparazzi are and I'll be strolling out in my PJs. I have to pick that game up.''

Kate, who stars in the new Express fall 2014 denim campaign, revealed that her summer style must-have is white denim, despite her accident-prone nature.

She disclosed to Glamour.com: ''I love white denim. I'm obsessed with it. I don't know, I spill all the time, I probably shouldn't be. I wear all-white a lot.

''I like white and blue too. It's so summery and so fun, and living in New York I have the tendency to wear all-black, so wearing all-white is a great change-up.''

The Sports Illustrated favourite will also be living in casual button-down shirts this season and shared her top tip for finding the right fit, which comes courtesy of none other than cosmetics maven Bobbi Brown.

She said: ''You know, something that Bobbi Brown told me on a shoot is that she always gets a bigger size and then hems it. I haven't used that trick yet, but maybe I will. I think it's important to find the right bra too.''