There's no love lost between Kate Upton and Victoria's Secret. 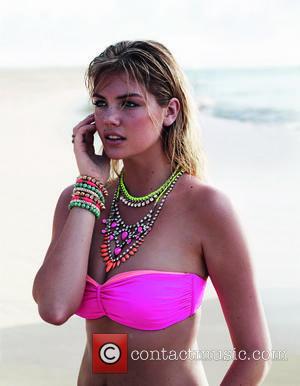 Kate Upton is said to be "furious" with her former employer Victoria's Secret for using a picture of her wearing a black bra in their new catalogue WITHOUT getting her permission. The shot is actually from 2011 and insiders say the lingerie giant do not have a license to use it. "Kate's not currently contracted to work with Victoria's Secret, and they didn't contact her before they used these images," an insider told The New York Post.

Upton has worked with Victoria's Secret in the past and modelled bras for the brand in 2011 - which is where the alluring shot is believed to have come from. The superstar model and Victoria' Secret appeared to have some sort of falling out following her departure from the company, with Victoria Secret's casting director Sophia Neophitou telling the New York Times in 2012, "[Upton is] too obvious. She's like a Page 3 girl. She's like a footballer's wife, with the too-blond hair and that kind of face that anyone with enough money can go out and buy.We would never use [Upton]."

Upton is yet to make an official comment on the picture, though she'll no doubt be rinsing Victoria's Secret for this one. If only to spite Neophitou. Kate Upton Is Said To Be 'Furious' With Victoria's Secret Erin Heatherton Is Another of Victoria Secret's Prized Assets