British Actress Kate Winslet Overcame Her Fear Of Alan Rickman To Work With Him On A New Movie Project 20 Years After They Appeared Onscreen Together In Sense And Sensibility. 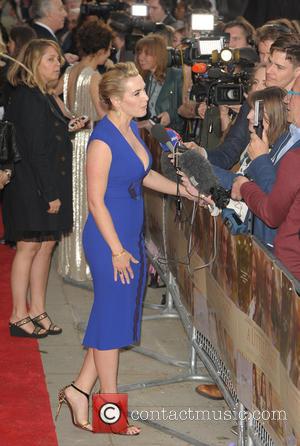 Picture: Kate Winslet - A variety of celebrities were photographed as they attended the UK premiere of 'A Little Chaos' which was held at the Odeon...

The Oscar winner was just 19 when she starred as Rickman's love interest in the 1995 period drama, which marked her second feature film, and Winslet admits she was terrified of the formidable actor.

The two stars have reteamed for the Die Hard actor's new directing project, A Little Chaos, and Winslet reveals she finally managed to get over her Rickman-related anxiety.

She says, "It was wonderful to be part of something that was a collaboration with a friend and someone who I've known for such a long time. Who I can't believe, really, I managed to ever get over my fear of.

"When I first met Alan I was absolutely terrified. I was 19, he was Alan Rickman, and he's got that voice, and I remember meeting him in the hair and make-up trailer and thinking, 'I'm going to die. He thinks I'm rubbish. Why am I here?' And here I am 20 years later having ended up marrying him in Sense and Sensibility and now being directed by him in A Little Chaos."