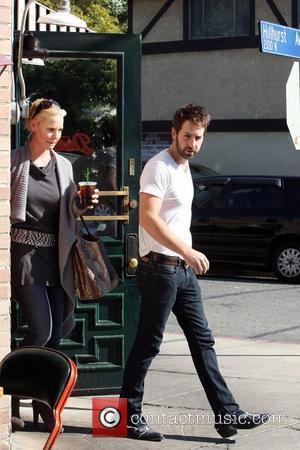 Katherine Heigl has laughed off the recent furore over her hot tub party with husband Josh Kelley - insisting the image of her talking to police officers in a bikini "cracks her up".
The actress and her partner hit headlines on Monday night (11Oct10) after a neighbour complained about the noise coming from the couple's home.
The stars were enjoying an evening in their hot tub and were pictured dripping wet in their bathing suits as they explained the situation to the cops.
Heigl admits she was baffled by the noise complaint, as she was just enjoying a quiet evening with her husband, but she found the whole incident extremely funny.
She tells iVillage, "We don't really do anything that scandalous or that exciting, so the fact that we're out talking to the cops in our bathing suits on a Monday night just cracks me up. We were hanging out at home just the two of us. We made ourselves some cocktails, and I had specifically worn a sexier bikini than I normally would because I hadn't seen (my husband) in two weeks.
"We were just chilling in the hot tub, and my neighbour started screaming at us (to be quiet). He's done it like four times before, and it was so infuriating because it was 9 o'clock at night and we were not shouting - just two people quietly talking and hanging out.
"I called my security and asked them to call the cops because at the end of the day, it's harassment at this point.
"The cops showed up. We don't put a towel on, we don't put a robe on, we just go out there to chat about this neighbour we can't stand in our bathing suits and my boobs look ridiculous!
"I just love it because it's the only scandalous, interesting thing that we've ever had to talk about."