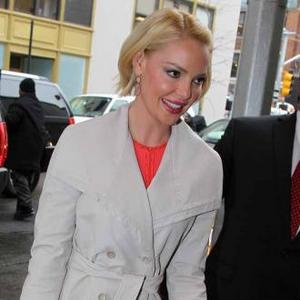 The former 'Grey's Anatomy' star - who adopted Naleigh from South Korea in 2009 with husband Josh Kelley - says she felt like a ''bad mother'' when she failed to Bond with her little one.

She said: ''I fought incredibly hard for my daughter to accept me as mother. Her rejection almost broke my heart.

''At first I blamed myself and thought I was a bad mother. It took a while before I could admit to myself that the lack of trust had nothing to do with me.''

To make matters worse, Josh was quick to form a relationship with the 10-month-old. She admitted: ''I wasn't exactly jealous, but I was a little bit envious.''

To cope with the pain, the 33-year-old actress threw herself in to work, but soon understood her absence was only making matters worse.

She said: ''When I realised that, I immediately cut back on work.''

With more time to spend together, the bond gradually developed and Katherine carved out a parental identity of her own.

In an interview with German magazine Bild am Sonntag, she explained: ''I'm the cuddler. I'm the one she comes to if she's hurt. And I have a ritual for putting her to bed. She has one blankie that goes over her, one that goes by her face, and one that she holds. It's our little thing.''