While promoting her new NBC series 'State of Affairs,' the 35 year-old actress was probed on if she is hard to work with. "I certainly don't see myself as being difficult and I don't intend to be difficult," she replied. 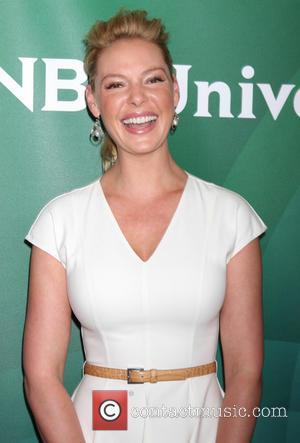 In a very awkward moment, Katherine Heigl was forced to address speculation that she is a difficult actress to work with.

The 35 year-old actress previously starred in 'Grey's Anatomy' for several years before finding success in popular movies such as 'Knocked up,' 'The Ugly Truth' and 'New Year's Eve.'

But now Heigl is making a return to the small-screen.

While attending the TCA Press Tour in Beverly Hills to promote her new NBC series, 'State of Affairs,' several reporters probed Heigl on what it is like having her mother, Nancy Heigl, as an executive producer, and if they are "difficult to work with."

"I can only say that I certainly don't see myself as being difficult and I don't intend to be difficult," she awkwardly replied.

Adding, "I don't think my mother sees herself as being difficult. I think it's always important to everybody to conduct themselves professionally and respectfully and kindly. So if I have ever disappointed somebody, it was never intentional."

Hopefully this will not translate onscreen when 'State of Affairs' airs this coming November, in which audiences will see Heigl play a highly-ranked CIA agent whose personal life is spiralling out of control.

The blonde beauty noted that she decided to return to television with this specific production was due to being offered a great character and an impressive script, adding, "Acting and performing has always felt like kids play to me. And producing felt like a grown-up job."

In unusual circumstances, both Heigl and her mother will serve as executive producers on the high-stake drama, but when asked about their working relationship, Nancy explained, "[Katherine and I] work as a partnership. I am her mother for sure, so of course I have her best interests, but I'm really learning. But it's been fun and it's been interesting. I'm really new to it."

More: Katherine Heigl Returning To Television, But Why Does She Have One Of Hollywood's Worst Reputations?

Katherine also spoke of being a mother, and revealed that this is why she took a break from acting. "I took a couple of years off to just really be with my family and be with my new daughter and expand my family," she said. "I needed that time. I needed to be a mom and be a wife and be a friend and revel in that. And remember what it is that I feel so passionate about in this industry." Heigl claims that she isn't difficult to work with