Dancing With The Stars: Who Scored A Perfect Ten? 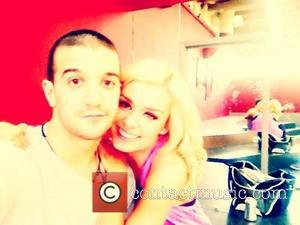 Picture: Katherine Jenkins posted this picture of herself and DWTS partner Mark Ballas on Twitter with the caption 'Sending you our love from Rumba training... #DancingABC...

One couple scored the first perfect of the season during Monday's Dancing with the Stars (April 30, 2012), but it wasn't frontrunner Katherine Jenkins and her partner Mark Ballas or her closest rival Jaleel White.
Television presenter Maria Menounos and her professional partner Derek Hough received a standing ovation for their vampire-themed dance and collected the season's first trio of 10's. Bruno Tonioli called their paso doble routine "spellbinding", adding, "Maria, the queen of the damned was the queen of the night". The couple probably shouldn't get too excited, considering three couples were queuing up behind them with 27 points, including Jenkins. Len Goodman called the Welsh singer's rumba "a classic", while William Levy and Cheryl Burke also won praise for their respective routines. Melissa Gilbert unfortunately found herself at the wrong end of the leader-board though she can be forgiven for her score of 21 given that she's still recovering from a head injury suffered a couple of weeks ago. Roshon Fegan and Chelsie Hightower found themselves in mid-table with a score of 25 for their tango, while Jaleel White scored a disappointing 24 for his waltz.
Actress Melissa Gilbert is the big favorite to exit the competition on tonight's results show, though it wouldn't be a surprise to see Jaleel make a shock departure after a below-part night.