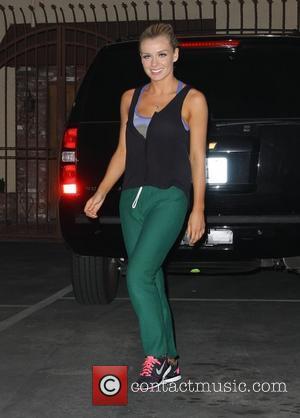 Katherine Jenkins dedicated her emotional waltz on this week's Dancing With The Stars to her late father, who passed away in 1996. The Welsh mezzo-soprano chose the year after the contestants were asked to recall a poignant time in their life and base a routine on it, reports the Press Association.
Jenkins shed tears after a near-perfect waltz to Josh Groban's To Where You Are, telling the judges, "In 1996, we found out that my father had lung cancer. I was 15 and my sister was 13.I got pulled out of my class one day by my auntie who came to school to say 'your dad's gone into a coma and you need to come to the hospice'. I hadn't said goodbye to him and it happened so quickly". Jenkins said her father passed away the following day, adding, "If I could go back and tell my dad that I would be in America and we'd be dancing on TV for him he just wouldn't believe that". Though Dancing With The Stars bosses were criticized for their low-key cast of contestants on this year's show - with Jenkins picked out as a prime example - the Welsh singer has dominated the competition so far. Judge Carrie Ann Inaba told her, "That was magic. It was almost like you had two partners...like your father's arms were around you, wrapping you through the dance".