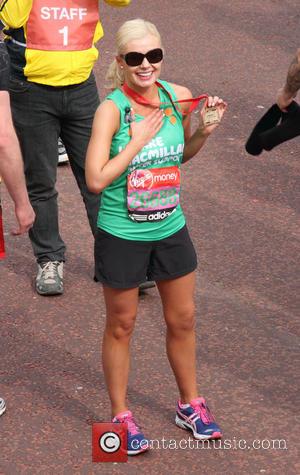 Jan Moir, Daily Mail columnist (some would call her a troll but we’ll leave that down to individual judgement) has yet again managed to anger the public (and Katherine Jenkins… well, firstly Katherine Jenkins and then a ton of people afterwards), by suggesting that the Welsh opera singer was looking all too glam as she finished the London marathon last weekend.

Moir accused Jenkins’ marathon-running efforts of being yet another example of the “thick fog of self-interest that seems to cloak everything she does.” She highlighted the “lashings of pink lip gloss, sooty false eyelashes and sweeping, coal black eyeliner” that she thought Jenkins was wearing throughout the race. Hitting back at Moir via Twitter, Jenkins couldn’t quite contain her anger within one tweet, so used a handy tweet-extension service to allow her to get her full argument across in one swoop.

She wrote: “Jan (Moir), I wish you love & happiness in your life. I adore & support other women and I only wish you could do the same. I ran on Sunday in memory of my father & to raise money (£25,000) for an excellent charity (@macmillancancer) who helped him when he was dying. Yes, I twittered about it but I did so to share my progress & day with those kind people on twitter who had supported & sponsored me. I ran in sunglasses because it was sunny. I tied my hair back in a pony tail because I expected to sweat. As if you had some insider knowledge you wrote I was wearing eye shadow, eye liner& lip gloss. Wrong again - none of the above - I had Vaseline on my lips, handed to us by St Johns Ambulance on our way round the route. You can knock me all you like but you cannot take away from me what I know I accomplished last weekend. Next time you run a marathon Jan, I will be the first to sponsor you, because I know how much guts, hard work & determination it takes.” It doesn’t take a genius to figure out who won that one, now, does it...?