Following the announcement of the college sweetheart's engagement, they are now in talks to star in a reality TV show which will follow their day-to-day lives.

Katherine Jenkins and AJ McCarron are in talks to get their very own realty TV show.

This news comes only two weeks after the 24 year-old model announced via Twitter that she and the former Crimson Tide quarterback are engaged.

Webb uploaded a series of photographs to the social media site that were taken moments after McCarron popped the big question.

Continue reading: Katherine Jenkins And AJ McCarron Are Set To Star In Own Reality Show

Model Katherine Webb and Footballer AJ McCarron are engaged! The couple announced their news via Twitter on Friday (28th March) but celebrated with an engagement party last night at a restaurant in Orange Beach, Alabama.

Katherine Webb, the US model and beauty pageant queen, is engaged to footballer AJ McCarron. The couple announced their engagement via Twitter on Friday (28th March). Katherine Webb and her boyfriend of over a year AJ McCarron are engaged.

Webb uploaded a series of photographs taken at the moment McCarron proposed. The first picture showed the couple embracing whilst a large ring can be seen on Webb's hand. She later added pictures of the ring and, yesterday (29th March), of the engagement party.

Katherine Webb and quarterback Aj McCarron are rumoured to have ended thier relationship, but is this really the truth?

There is a lot of talk in the rumour that American Beauty Queen Katherine Webb has split from University of Alabama’s beloved quarterback, AJ McCarrron. By Victoria Pavlova in Lifestyle / Showbiz on 21 April 2013

Nicole Eggert has become the latest in a line of celebrities to succumb to the danger element of 'Splash'.

The TV show “Splash” has a reputation of being quite dangerous for its contestants and Nicole Eggert is just the latest in a list of celebs, injured during the difficult diving stunts. The former Baywatch girl "bungl[ed] a high-dive and brutally back-flopp[ed] into the pool" while taping an upcoming episode of Splash on Thursday, TMZ reported. She was rushed to a hospital immediately thereafter. The dive was meant to include several backflips and probably would have been quite impressive, if she had actually managed it. A rotation error reportedly resulted in her hitting the water back first and sustaining some serious injuries. Ouch. Even describing that is painful."[She had] a bad landing," a Splash representative subsequently confirmed to E! News. "She is currently consulting with a doctor.” No announcement has been made yet about whether Eggert will be able to return to the show.

Katherine Webb ordered to leave the contest by a doctor

Katherine Webb quits Splash, as the show loses yet another star. Reality shows are supposed to bring out the best in our minor celebrities. They are supposed to overcome their fears, find talents they never knew they had, provide inspiration for viewers at home, move us with their emotional backstory. Sadly, the US version of Splash hasn’t quite had that effect, so far.

If you’re unfamiliar with Splash, it’s a show in which a group of semi-famous almost-celebrities learn to do what loads of people do when they’re a kid: Jump off things, into water. Now, to be fair, the skill level required for the whole jumping off things in to water contest does go a little bit higher, as the season progresses, than most people would manage during a summer vacation at the hotel pool. However, Splash has been a little lacking in drama. And now, Katherine Webb has quit – not in a scandalous fit of frustration or after the producers decided to do a doping test. Nothing that dramatic. She’s hurt herself and the doctor says ‘no more.’ Rumors that she quit because she realised how boring the show was are currently unconfirmed, mainly because we just started that rumor right now. “I went to the doctor and, unfortunately, he told me I'm out of the competition,” the 23 year-old model explained. She later tweeted “Thank you guys for all the support! Means so much. Love you guys."

She was replaced by Louie Anderson, who was booted off the show previously and wasted no time in dropping right back out again, the lily-livered so-and-so. “I know I have very little chance of winning this competition," he said. "And I am going home, and I am going to defer to Brandi (Chastain) because she has a chance to win this competition." And let's not forget Kendra Wilkinson who left sobbing because she was scared of heights. Splash, ladies and gentlemen: really bringing out the fighting spirit in these minor celebrities.

ABC's Splash is based on ITV's UK version, which pulled in millions of viewers despite being derided by critics and audiences alike.

Splash, ABC's new reality diving competition, premiered on Tuesday evening (March 19, 2013), to a mixed response on Twitter. Based on the UK version hosted by Olympic diver Tom Daley, Splash sees 10 celebrities train for six weeks and perform at least one dive for a live audience each way. The dives are usually terrible.

Though the UK version was recently renewed for series two, the show was derided for its slow pacing, bad diving, poor celebrity names and clueless judges. The problem is, clearly, that a dive into a swimming pool lasts about one second, while the show lasts for about, one hour. As such, the show is filled with a whole lot of nothing.

American model and 2012's Miss Alabama Katherine Webb poses in a gorgeous fuchsia dress on the red carpet at the Marquee Nightclub in Las Vegas where she is celebrating the new 2013 Sports Illustrated Swimsuit Issue magazine set to feature cover girl Kate Upton. 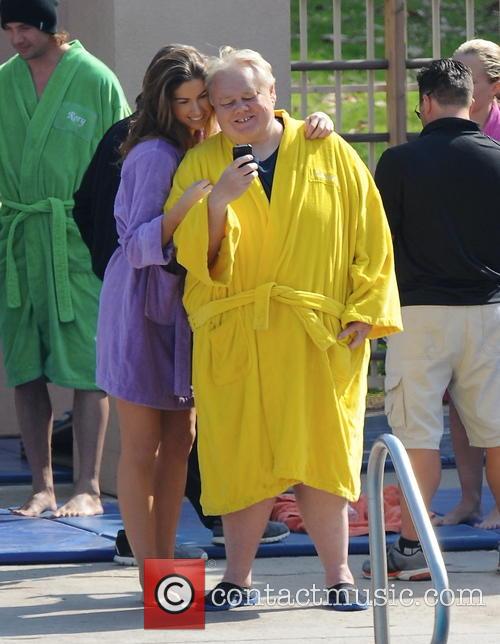