Actress Kathy Bates Really Was Miserable While Filming 1990 Movie Misery, Because She Hated The Violent Scenes And Twisted Her Ankle On The First Day. 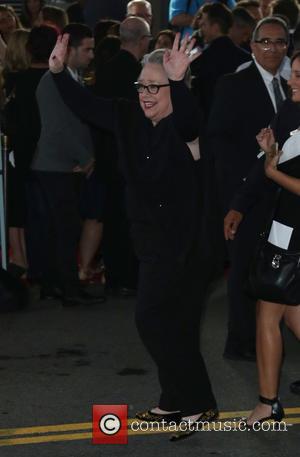 In a 25th anniversary reunion with co-star James Caan for Entertainment Weekly magazine, the star reveals she was injured on day one after twisting her ankle falling down the steps of her trailer, and she wasn't a fan of her veteran castmate's tough guy acting either.

"When he slammed my head into the floor and started shoving the paper in my mouth, that was bad," she says. "When we got through with that, I just went off stage and burst into tears... It hurt."

"That's the best thing about Kathy, because she's playing this insanely brutal woman (in the film), (and) she was, like, this little prairie flower," Caan adds. "She got all upset when it got violent."

In the classic Stephen King adaptation, Bates portrays an obsessed fab of Caan's writer character Paul Sheldon, who keeps him captive when his car crashes near her home, breaking his ankles when he attempts to escape.

The movie became Bates' breakthrough role and her portrayal won her the 1991 Oscar for Best Actress.