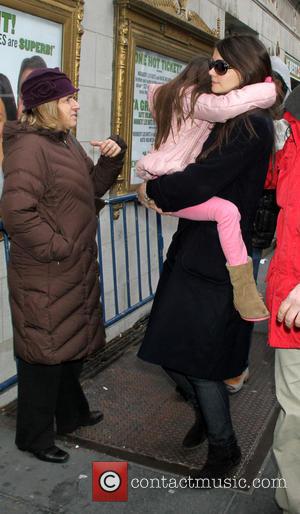 Since her marriage with Tom Cruise broke down early last year, leading to a divorce in June, Katie Holmes hasn't really been linked with anyone else. She has, instead, been a devoted mother to her impeccably dressed daughter Suri, as well as trying to make it back into acting by appearing on Broadway in the recently closed show 'Dead Accounts'. With quite a bit of bad news surrounding her it's about time that she begins dating again. The first rumour is one about her and Jake Gyllenhaal, as the Sun reports.

"Josh [Jackson] has been the mastermind behind this romance," a source told the paper. "Katie says that they have tons in common and Jake has already been to see her in Dead Accounts, plus she has been over to his apartment in the West Village for dinner." Joshua Jackson is the star of Mighty Ducks, Holme's old colleague from Dawsons Creek and the pair have remained good friends. What the pair actually have in common remains unclear, and as yet there are no photos or substantiated reports of their being together, so that whole thing could be guff. However, Jake seems like a nice chap, and Katie could probably do with some companionship so we hope it's all true.

Gyllenhaal's dating past has been almost exclusively blondes, including Reese Witherspoon, Kirsten Dunst and recently Taylor Swift, so Holmes is a break from normality. However, given that all his past relationships ended, that could probably be a good thing.