Katie Holmes celebrated her 38th birthday with a group of her best pals in New York City on Wednesday (18.12.13). 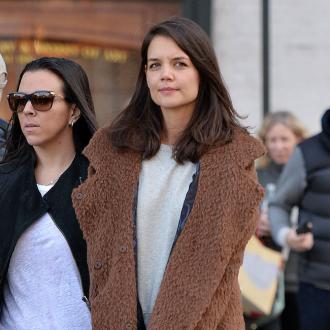 Katie Holmes celebrated her birthday with a group of her best pals.

The 'Mania Days' actress, who has a seven-year-old daughter, Suri, with her ex-husband, Tom Cruise, turned 35 on Wednesday (18.12.13) and was spotted enjoying a special lunch with her friends at Cafe Gitane, a French-Moroccan eatery in New York.

The brunette beauty appeared to be in great spirits as she exited the restaurant in a warm black coat and strolled through the West Village with a huge smile on her face, according to UsMagazine.com.

Katie also took to Twitter to thank her followers for sending her their best wishes.

She tweeted: ''Thank you all for my kind birthday wishes -- you have made my day!''

Katie hasn't been on Twitter for long, after joining the social networking site on October 25 while on the set of 'The Giver' in South Africa.

Re-tweeting a picture from producer Nikki Silver, her first post featured a photo of the cast, including 'I Knew You Were Trouble' hitmaker Taylor Swift.

In a subsequent tweet, she wrote to her followers: ''So happy to be on twitter!!!!!! Sending first tweets from South Africa!!!!! (sic)''