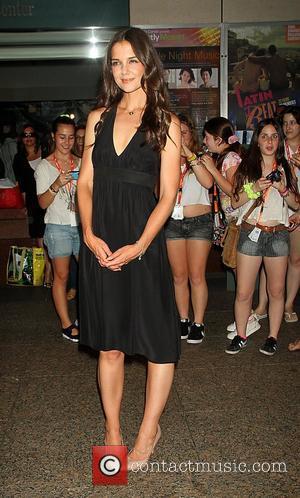 Katie Holmes was spotted arriving at the Digital Domain Studios this week sporting what appeared to be a henna tattoo of two chains running around her wrist. Although the meaning of the body art is unclear, reports suggest it may represent her relationship with Tom Cruise, reports the UK's Daily Mail.
The subtle design echoes that of her friend Victoria Beckham's tattoo, which signified the 10 year anniversary of her relationship with husband David. Holmes was said to be "impressed" by the fashion designer's tattoo, which reads, "Together, Forever, Eternally". Beckham had the message written in Hebrew on the inside of her wrist back in 2009. Despite the sentiment, husband Tom was reportedly reluctant for Katie to go ahead with the tattoo and "desperately" tried to talk her out of it. It is likely that Holmes may have compromised and opted for a henna design instead, although this is unconfirmed. The A-list couple married in Italy on 18th November 2006 - the actress had given birth to the couple's daughter Suri in April of that year.
The actress currently stars in the horror-thriller 'Don't Be Afraid of the Dark', written by acclaimed filmmaker Guillermo Del Toro. The movie follows a young girl who after being sent to live with her father, begins to discover creatures living in his Gothic mansion.