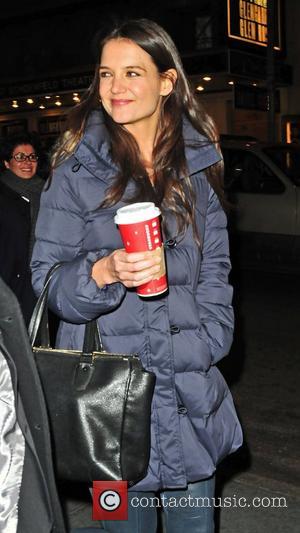 Katie Holmes went through Thanksgiving without her beloved daughter Suri, who was instead spending the holiday with her dad, Tom Cruise.

The actress was spotted by paps as she went to board her plane out of New York so she could spend the holiday with her family in Ohio, meanwhile Suri, 6, flew east to join dad Tom in the UK to celebrate the American tradition. Tom has apparently not seen Suri since July this year (12) as he has been on the other side of the Atlantic whilst filming the upcoming All You Need Is Kill, but made special arrangements to make sure that he could spend the holiday with his daughter.

When Katie appeared on Live! With Kelly and Michael earlier this week she revealed some of her holiday plans, saying that she had the day off from her Broadway play Dead Accounts and planned to go she her family back in Ohio, not mentioning whether Suri would be with her or not. The split between Katie and Suri marks the first time when the mother and daughter have been apart over the holiday. Recently, it has been reported that the two will be reunited for Christmas, with Tom also said to be joining them for a family Christmas together despite having divorced earlier this year. The devoted parents are said to be planning on having a trial dinner together before decided whether to spend Christmas together, all for the sake of Suri.