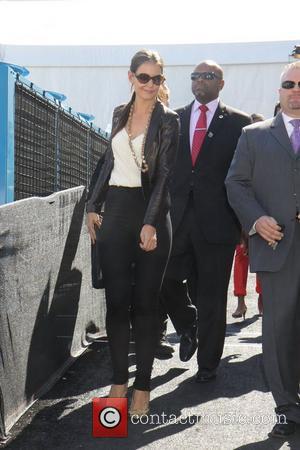 Gossip websites reacted with shock today when Hollywood star Katie Holmes was spotted getting from A to B on the New York underground.

'What?!' I hear you cry over the din of several thousand jaws hitting the ground in horror. Yep, the one and only Katie Holmes from 'Dawson's Creek' was forced to go incognito as she braved the busy method of public transport in a plain cream sweater, blue jeans and sunglasses.

Okay, so it's not exactly breaking news, nor is it really a scandal. Though it does make one speculate about how much was left to Holmes following her spectacular divorce from movie legend Tom Cruise; using public transport either suggests she's broke and can't afford a chauffeur, or that she's becoming super eco-friendly. or that it's probably quicker to get around the city on a train than in a car on those busy streets. Either way, it's a great normalization of celebrities as she becomes the latest in a string of stars to take to the subway. Jake Gyllenhaal, Jay Z, Anne Hathaway, Jessica Alba, Hugh Jackman, Lindsay Lohan and Bradley Cooper have all been seen on the Non-Celebrity Express which kind of suggests that the underground locomotive is the new stretched limo.