Holmes acting oddly in public... maybe she's in a relationship, or maybe she just hate the paparazzi 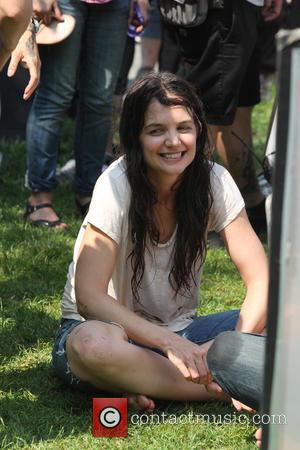 Wait a minute, wait a minute, who’s this Katie Holmes is kissing!? She’s not been seeing getting smoochy with anyone since her split with Tom Cruise last year. However, there have been pictures posted by the Daily Mail that show her getting intimate with someone of a definitely male and smoking hot persuasion. So who is it? And what’s going down?

Well, it’s just her co-star Luke Kirby, and the pair were filming Mania Days (disappointingly not a film about a road trip to watch Wrestlemania). However, there could be more than meets the eye, with the New York Daily News reckoning that there might be something going on off-screen between the pair. “The last month you rarely see her anymore,” a source told the paper’s [email protected] section about spotting Holmes around Chelsea, where she lives. “Whatever she’s trying to hide I don’t know, but she’s not going in the main entrance [of her building] any more.”

Maybe she’s trying to hide a fledgling romance with Kirkby? That’s what they seem to think anyway. Apparently at one point she was with him almost handing hands, but jumped in a cab as she spotted paparazzi leaving Kirkby by himself: “She bolted, jumped in the back of a cab and lied down in the back seat,” said a source. “Meanwhile Luke walked to a falafel place on MacDougal St. and was texting furiously and looking around. All of a sudden, Katie comes down the street. Normal people don’t act like this.” Hmmm…