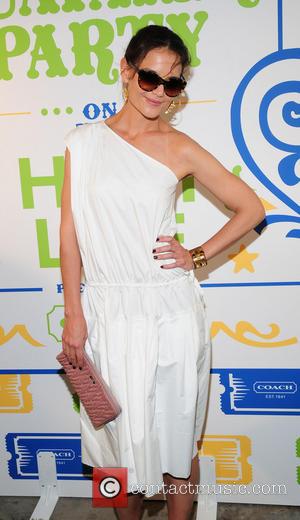 Tom Cruise's ex-wife was among guests at the event at Perelman's home in the Hamptons, New York on Saturday (24Aug13), which was also attended by Billy Joel, Anjelica Huston, Howard Stern, and John MCEnroe.

Stars including Jon Bon Jovi, Darlene Love, and Mary J. Blige performed for the evening, which was dubbed Apollo in the Hamptons, but it was during Kravitz's headline set that the night took an odd turn.

Several guests including Holmes, DeGeneres, Jamie Foxx, Ciara, Pharrell Williams, and the Roots joined the Fly Away hitmaker for a unique performance, which included a snippet of Blurred Lines by Robin Thicke.

According to New York Post gossip column Page Six, Holmes later told pals, "I haven't had such a good time in so long."