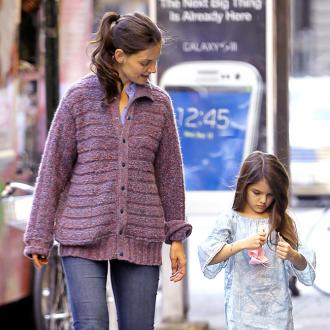 Katie Holmes will reportedly spend Christmas with Suri Cruise and her own family.

The 'Dead Accounts' Broadway star - who split from 'Mission Impossible' actor Tom Cruise in June after six years of marriage and has sole custody of their six-year-old daughter - is said to have agreed that Suri will spend the festive season with her after she spent Thanksgiving with him in London last week.

A source told the MailOnline: ''Katie and Tom are focused on Suri and as part of their divorce agreement, Suri will spend Christmas with Katie.

''They are trying to be amicable and Tom will see Suri over the holidays - but on Christmas, Suri will be with Katie and her family.''

The little girl was spotted back at her New York school yesterday (26.11.12) after spending last week in England with Tom, who has been shooting a movie there and prior to last week's visit hadn't seen her for three months.

A source told the Daily Mirror that Tom hired four guards to protect Suri and treated her to a day at the Harry Potter World theme park in Hertfordshire on Friday (23.11.12).

Katie, 33, spent the holiday with her own family in her native Ohio.

She previously opened up about her plans, saying: ''We have Thursday off, so I'm going to have a chance to go home with my family.

''My sister makes a really good sausage stuffing and my mom makes a great turkey. Many years ago, my dad started this tradition where we all do this run in the local park.

''It's a three mile run called the Turkey Trot. There's even a prize, which I haven't won yet. But it's really fun.''