No-Show: Katie Holmes Will NOT Be At New York Fashion Week 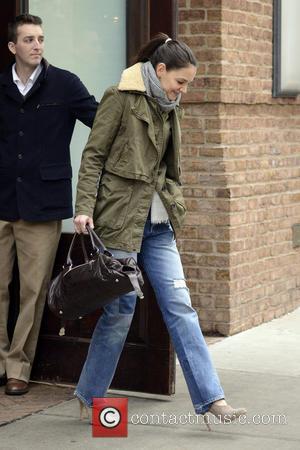 Katie Holmes will NOT be appearing at the forthcoming New York Fashion Week, Womens Wear Daily have confirmed. It wasn’t deemed headline news by WWD, who shoe-horned the news in with a short piece about Selena Gomez planning to sit on the front row of the teen-curated Adidas NEO show.

Huffington Post picked up on the news though and started to speculate over why the former Mrs Tom Cruise would be absent from the pivotal fashion event. Huffington Post that Holmes may simply just be too busy to take time out for the fashion show. She’s only recently finished her Broadway show, Dead Accounts, which – unfortunately for Katie – finished early because of low ticket sales. She also recently signed on as the face of Alterna Haircare (she’s also co-owner of the brand so will be busy promoting that). And let’s not forget she’ll be busy looking after her six year old daughter Suri.

However, the absence of the latest Holmes & Yang fashion collection could have something to do with the lukewarm reception that it has received. In the war of celebrity collections, Holmes found hers pitted against the Olsen twins’ far more successful range, whilst hers was met with a tepid response. Katie Holmes at the opening night of The Other Place