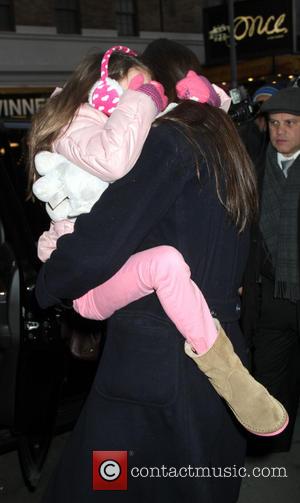 Katie Holmes and Jake Gyllenhaal dating? Not according to Gossip Cop. The Metro may have reported that the two actors had started up a romance (based on a story from Grazia) but a representative for Katie Holmes has reportedly told the folk over at Gossip Cop that it simply isn’t true. For a fleeting moment, it looked as though the Donnie Darko star and the woman who recently escaped her marriage to Tom Cruise and got a speedy divorce could be the hottest new Hollywood couple. It’s “not at all true” though, apparently, according to the rep. And a source that knows Gyllenhaal also dismissed the idea, saying that it’s a “complete fabrication.”

Supposedly, Katie and Jake were introduced by Katie’s former Dawson’s Creek star Joshua Jackson . It’s been reported that Jake went to see Katie in her Broadway play Dead Accounts and that she’s been to his place for dinner. Of course, all of these things may well be true but that doesn’t necessarily mean that they’re dating. So it looks as though that rumour has been sunk before it even set sail.

Meanwhile, Katie’s ex, Tom Cruise is said to be dating a restaurant manager named Cynthia Jorge, according to The Daily Mail, suggesting that he has found it a little easier to move on from their very public marital split than Katie has.