Suri Cruise is reportedly bagging £1.5 million for her fashion range. 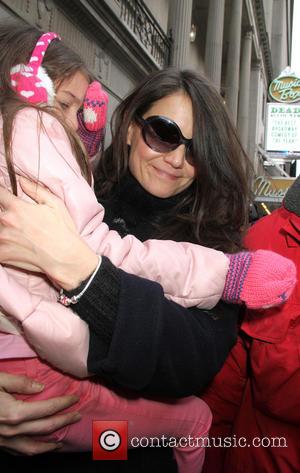 Suri Cruise is launching her own fashion line, imaginatively titled 'Suri,' later this year. The 7-year-old daughter of Tom Cruise and Katie Holmes has inked a deal worth £1.5 million deal to sell the range in a New York Department store this autumn, according to the UK's Sun newspaper.

If the brand sells, it will be rolled out in shops across North America at some point in 2014. A source said: "Suri is only seven but she is incredibly interested in clothes. She has been through a very difficult year and adapted amazingly to her new life in New York, including the upheaval of starting normal school," adding, "This is a nice hobby for her, it's certainly not going to take over her life. Most girls dream of being able to make their own clothes, this just means her drawings will now become a reality.It'll be interesting to see how it pans out, there's nothing around quite like it."

Suri's mother Katie and her stylist Jeanne Yang are also on board for the range, which covers everything from dresses, tops and shoes to accessories. The initial idea was for Suri to have her own fashion blog but the concept became more rounded after several firms approached Katie about a physical collection.

Suri's parents Katie Holmes and Tom Cruise divorced last year with the actress gaining custody of the 7-year-old." I did not expect that," Cruise recently confessed to German TV network ProSieben, "Life is a challenge. To be 50 and have experiences and think you have everything under control, and then it hits you-that's what life is..Life is tragicomic. You need a certain sense of humor." Suri Cruise With Katie Holmes At A Brooklyn Park