Review of The House Album by Katie Melua

The fourth album from the young singer/songwriter comes as a production by William Orbit. If anything this album is slightly more edgy and even a little electronic. 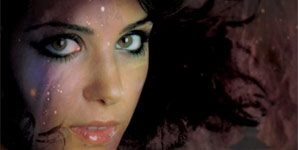 The House has quite a theatrical start to it, and you begin to wonder what it would be like to be on her train of thought. As she sweetly sings 'I'd love to kill you as you eat'. Saying this, the album is quite hard to get into. It's like eating dry crackers. they don't taste bad, but they are a chore to get through; I was relieved when it got going. 'A Happy Place' is the first standout track and basically explains itself - a happy song with a fast rhythm, building up a tense pace like winding something up tight and releasing.

'God On The Drums, Devil On The Bass' proves Melua can produce a darker and heavier sound. A little more modern and creative perhaps than her last few albums, yet fans shouldn't worry. The ballads she is known for, the perfectly sweet vocals, and the slightly 'out there' topics are all still present. This is a well produced album that Melua fans will not be disappointed by, there was never any doubt that she was a talented artist.

It's not a statement album, but it's well executed and works well after a long day.