Katie Price fears she has been targeted by kidnappers after a tracking device was found fitted to the bottom of her car. 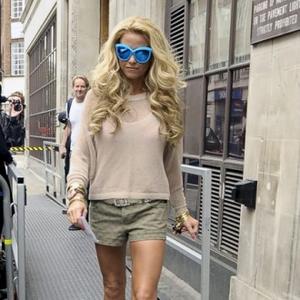 Katie Price fears she has been targeted by kidnappers again - after a tracking device was discovered underneath her car.

The former glamour model - who was targeted by a gang 10 months ago - is concerned about her safety after the state-of-the-art device was discovered fitted to the base of her Pink Range Rover during a routine vehicle service.

Katie told the Daily Star newspaper: "The garage had my car on a ramp during a routine MOT and spotted this tracker.

"The car was last serviced on August 16, so I know someone's been snooping around my property and shoved it on between then and now.

"Because I had a kidnap threat at the beginning of the year, we're wondering if it could be related. Basically, it means whoever planted it knew exactly where I was at all times and could then follow me, possibly with a view to kidnapping me. It's terrifying."

Katie - who split from second husband Alex Reid in January and ended her four-month romance with Leandro Penna in October - has reported the Discovery to police and is hopeful they can track down the person who planted it.

She added: "Luckily, the device had a security number, so the police are looking into that to see where it was bought and, hopefully, find out who's responsible. After the year I've had, it's just what I need."

The TV star - who has three children, Harvey, nine, Junior, six, and Princess Tiaamii, four, from previous relationships - recently revealed she has increased security on her estate in Brighton, South England, following the kidnap threat this year.

She said: "I had another kidnap threat this year, quite a bad one.

"My house is now like Inspector Gadget.com because I'm in the middle of 52 acres on my own.

"You name it, my house has got it, from all the gates into my property, cameras inside and out and panic buttons everywhere."

Katie was also previously the target of a kidnap threat in 2009.