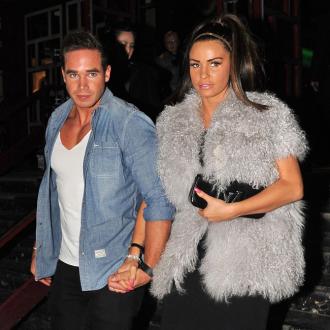 The former glamour model - who already has three children from previous relationships - is expecting her fourth child with husband Kieran Hayler.

The couple married just five weeks ago and Katie admitted her pregnancy was a shock, telling the Sun on Sunday: ''It comes as a shock. But we're all over the moon

''I'd be lying if I said I wasn't nervous because I've experienced miscarriages in the past.''

Katie, 34, and Kieran, 25, tied the knot after a whirlwind two-month romance but she previously insisted she doesn't care what anyone thinks about their union.

She said: ''I know my marriage to Kieran is going to attract criticism and that there will be people selling stories on the back of their perception of me and my decision. I will take that criticism on the chin and argue my corner where I feel it is necessary.

''As usual, I get a hard time for my choices because I'm me - I still don't really understand why.

''This is only my third marriage. I did my own Pricey Marriage Survey and discovered I was in good company. Joan Collins has been married five times, Liz Taylor did eight and Zsa Zsa Gabor nine.

''So there! I get stick, but no one has picked on them for all the marriages they've had.''

Katie - who has children Junior, seven, and Princess Tiaamii, five, with first husband Peter Andre, as well as 10-year-old Harvey from a relationship with Dwight Yorke -

She was also married to cage fighter Alex Reid and split from her last fiance Leandro Penna in October.