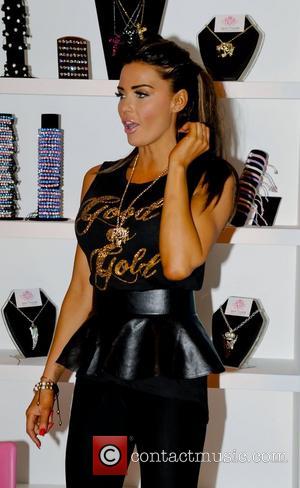 Picture: Katie Price promotes her range of jewellery at The Clothes Show Live 2012 at the NEC Birmingham Birmingham, England - 09.12.12

A victory for the good taste brigade – Katie Price has been forced to hand back the gaudy pink heart engagement ring that she got from her short-lived Argentinian fiancé Leandro Penna.

Katie was given the ring in March, when Leandro presumably confessed his undying love for her. By October, though, marriage number three for Price was called off when they split in October. Apparently, Leandro never finished paying for the ring, so it’s been claimed back.

There’s more to this ring than meets the eye, though. Katie received a message of support on Twitter from her friend Phill Turner, saying “I’m sorry to hear your heart ring has been repossessed as that Spanish (sic) guy never paid for it like everything else,” Katie revealed that Leandro “took advantage of my generosity.” Lenadro, however, has hit back at Katie’s diss, saying that he never bought the ring in the first place. “It was a ring Katie Price designed, ordered and had delivered directly to herself from her personal jeweller. Katie took delivery after we had ended our relationship. After Katie had possession of the ring and we had ended our relationship the bill was then passed on to myself, to my surprise. After open dialogue between Katie’s and my own management an agreement was reached for Katie to voluntarily return the ring, ending the threat from her jeweller of civil court action.”

As an aside, The Sun reports, Leandro then added a message to Phill Turner, saying “I’d also point out to Mr Turner that I am Argentinian, not Spanish. Easy mistake to make, however, the two countries are only 6,227 miles apart.” Oof, looks like Leandro got the last laugh, there.