Katy Perry is reportedly dating Florence + the Machine guitarist Robert Ackroyd, and was overheard calling him her 'boyfriend' at Coachella. 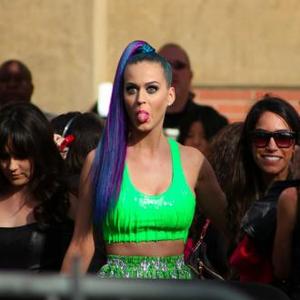 The 27-year-old 'Firework' singer - who split with Russell Brand in December after just 14-months of marriage - was apparently overheard referring to Robert as her ''boyfriend'' at California's Coachella festival earlier this month.

A source told Life & Style magazine: ''Backstage at the Artist Lounge at Coachella last weekend, Katy kept saying her boyfriend was the guitar player for Florence + the Machine.

''She and a bunch of friends were supposed to go see Dr. Dre together, but Katy said she was waiting to watch her boyfriend perform.''

The pair were photographed holding hands whilst watching Rihanna perform with Calvin Harris, and Robert later appeared to refer to Katy by her initials on twitter.

The 'Hot and Cold' hitmaker has previously been linked with CHANEL model Baptiste Giabiconi, while her soon-to-be ex-husband Russell - who insists he is ''doing well'' following the collapse of their marriage - has already moved on with model Nikolett Barabas.

Talking about his positive attitude to the split, Russell recently explained: ''I don't have to let anything go. I don't hold on to anything negative. It's the same as zero-ness.

''It's not about letting it go. You can't let go of something you don't hold, you know. It's meaningless, [and] much of our world is predicated on meaninglessness. And I don't do that anymore.''