'Dark Horse' hitmaker Katy Perry has shared the outfit she intended to wear to the 2020 Met Gala if it had taken place. 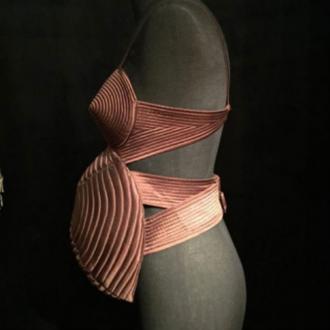 The 35-year-old singer - who is expecting her first child with fiancé Orlando Bloom - intended to wear a Jean Paul Gaultier designed corset, highlighting her baby bump on the red carpet at the annual fashion fundraising extravaganza which was scheduled to take place at New York's Metropolitan Museum of Art on Monday (04.05.20) before the event was cancelled due to the coronavirus pandemic.

The theme of this year's Costume Institute Gala was set to be About Time: Fashion and Duration, and Katy's outfit was a timeless testament to the designer's legacy as it paid homage to iconic cone bra he made for Madonna.

Gaultier originally created the look in 1983 before Madonna turned it into a pop culture reference during her 'Blonde Ambition World Tour' in 1990, launching the trend of wearing underwear as outerwear.

The 'Dark Horse' hitmaker's post comes as a number of famous faces share their most memorable outfits from the Gala over the years after the event was postponed.

Staff were told in an internal email that the Met Gala would be cancelled after the Centres for Disease Control advised that no gatherings of over 50 people should take place within the next eight weeks, leading the museum to cancel or postpone all programmes and events through to May 15.

The news came just days after the museum announced it would close its doors after two of its employees were found to be suffering from symptoms associated with the contagious respiratory disease.

It marks the first time that the event - for which tickets can cost up to $35,000 a person - has been called off in the 22 years that Vogue editor-in-chief Anna Wintour has chaired it.

Emma Stone, Meryl Streep, Lin-Manuel Miranda, Nicolas Ghesquière, who is Louis Vuitton artistic director, along with Wintour were expected serve as co-chairs for the popular event.