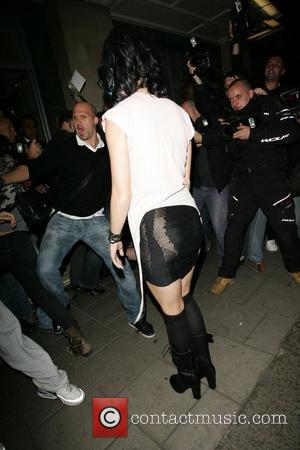 Picture: Katy Perry is swamped by photograhers as she arrives back to at hotel London, England - 01.09.10

Katy Perry conjured up the magic of cult movies Dirty Dancing and Ghost as part of an hour of online dares and challenges organised by Britain's Radio One on Thursday (02Sep10).
The pop star donned an unflattering painter's one-piece and sat at a pottery wheel as DJ Scott Mills played Patrick Swayze to her Demi Moore.
The odd couple recreated Ghost's most famous scene as the Righteous Brothers' Unchained Melody was played in the background after a fan requested the skit as part of the You Control Katy Perry project.
Game Perry laughed, "I'm getting the hang of it. I could be a potter... We've made a tunnel."
Mills and Perry were then joined in their "white room" studio by ballroom dancer Brendan Cole who helped them recreate scenes from Dirty Dancing.
Fans also requested Perry and Mills play Swingball, impersonate her British fiance Russell Brand, pop balloons, spraypaint self-portraits and perform a one-minute stand-up comedy act.
Perry briefly fled when a Brand impersonator joined her and Mills.
The singer said, "I was scared. Can you imagine if your love walked in when you knew they were on the other side of the world?"
The entire hour of skits and challenges was broadcast live online.