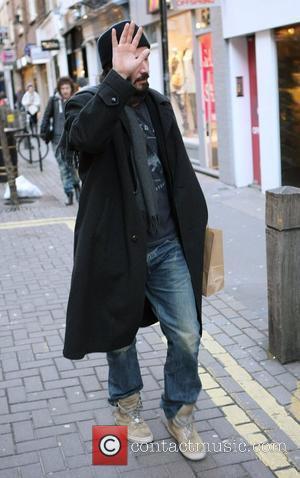 Picture: Keanu Reeves out and about shopping in Covent Garden London, England - 09.01.11

BILL & TED 3, the third instalment of the cult 'Bill & Ted' franchise, is officially on its way, according to Keanu Reeves. The actor, who played Ted in the movies, says the writers are around six weeks away from a draft of the script, reports MTV News.
The actor says 'Bill & Ted 3' is likely to build on previous storylines, saying, "When we last got together, part of it was that Bill and Ted were supposed to have written the song that saved the world, and it hasn't happened. So they've now become kind of possessed by trying to do that. Then there's an element of time and they have to go back". Previously, Reeves had said that the original screenwriters Chris Matheson and Ed Solomon were "going to try and see" if they could write something. 'Bill & Ted's Excellent Adventure' in 1989 and the sequel 'Bill & Ted's Bogus Journey' in 1991 co-starred Reeves and Alex Winter as high school students traveling through time to piece together a history project. In the third movie, the characters are now in their mid-forties, something that Reeves described as "pretty excellent".
Before beginning work on 'BILL & TED 3', Keanu Reeves will first star in the action-drama '47 Ronin' about a band of samurais who set out to avenge the death of their master.