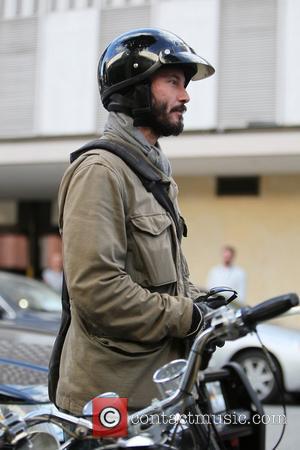 Picture: Keanu Reeves returning to the scene and speaking to the Beverly Hills Police officer A woman parking on Roxbury Drive backed her Mercedes GLK SUV...

Keanu Reeves was met by police in Los Angeles on Thursday (06Oct11) after a female driver crashed into his beloved motorbike.
The Speed star parked his classic Norton Commando 750 motorcycle outside a medical building in Los Angeles and headed back to pick up his ride later in the day.
However, a woman had backed her Mercedes into the bike and police were called to the scene - and Reeves was met by cops as he returned to his parking space.
The actor was spotted inspecting his vehicle for damage before police officers handed over the personal details of the woman who had damaged the bike.