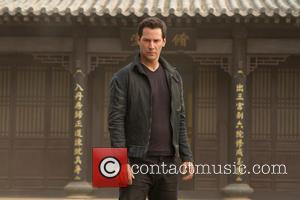 A top Chinese movie executive involved in Keanu Reeves' directorial debut has fallen victim to thieves after his luggage was stolen from a French hotel during the Cannes Film Festival.

Zhang Qiang, vice president of the China Film Group, was forced to pull out of a press conference with The Matrix actor for the film Man of Tai Chi on Thursday (16May13) after discovering that his suite at the Pierre & Vacances Residence Cannes Beach had been ransacked and his bags taken.

And he was further enraged by the alleged attitude of hotel staff, who reportedly told Qiang he'd have to file a police report by himself, according to The Hollywood Reporter.

Venting about the incident on Chinese social networking site Weibo.com, he wrote, "Security in France is so bad, and the (people) are so arrogant".

The burglary was the latest drama to hit the prestigious annual gala - $1 million (£645,000)-worth of Chopard jewels were stolen from an employee's hotel room last week (end17May13), while a man was arrested on Friday (17May13) after causing a security scare by allegedly firing a gun filled with blanks and brandishing a fake grenade during a waterfront Tv interview with Christoph Waltz.