Kiera Knightley has reportedly been offered a recording contract by Adam Levine, who is keen to sign her to his new label '222 Records'. 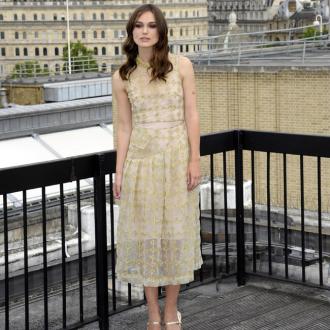 Keira Knightley has been offered a record deal by Adam Levine.

The 29-year-old actress - who plays songwriter Gretta alongside Adam in the new comedy-drama 'Begin Again' - is said to have impressed the Maroon 5 frontman with her vocal abilities, prompting him to offer her a record deal at his new label '222 Records'.

A music industry insider told The Sun: ''Keira has offers on the table and is tempted by them. She enjoyed singing in the movie and people around her were impressed.

''Adam has just started a label called 222 Records and has been trying to persuade Keira to sign a deal with him.''

The 'Harder To Breathe' hitmaker - who also stars as a coach on the 'The Voice' - was so impressed by Keira's talent, he now believes adding her to the new label will give it a ''kickstart'' in the industry.

The source explained: ''He thinks she could be a successful pop star and sell loads of records, which would help kickstart his career as a label boss.''

However, Keira - who is married to Klaxons musician James Righton - has previously insisted that she struggles to play guitar and has no real interest in music.

She confessed: ''I know nothing about music.''

Meanwhile, Adam and his 'Victoria's Secret' model girlfriend Behati Prinsloo tied the knot in Mexico over the weekend.

According to Us Weekly, the happy couple were joined by around 300 guests as they showed their love for one another in a beautiful ceremony.

Stars like Jonah Hill, Candice Swanepoel and Jason Segal were all in attendance.

An insider recently said: ''Everyone seemed to have a great time. The party went to the late hours.''