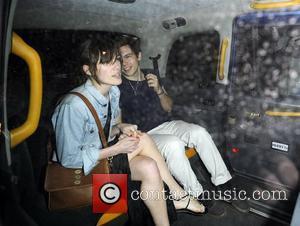 Keira Knightley gave the world the glimpse of her engagement ring, after enjoying a romantic meal with husband-to-be James Righton in London on Wednesday (May 30, 2012), reports the Evening Standard.
The Hollywood actress and her fiance had dined at The Wolseley restaurant in Green Park, before jumping into the back of a taxi. Dressed casually, the couple snuggled up to each other, with Knightley showing off her stunning diamond engagement ring, which features a simple thin gold band. The 'Pirates of the Caribbean' actress took advantage of the hot London weather by donning a black summer dress, while Klaxons star James opted for a plain navy t-shirt. The actress draped her leg over her new-fiance in the taxi, while gazing into his eyes.
The couple - who were introduced by their mutual friend, the presenter Alexa Chung - announced their engagement last week after 15 months together. Keira was previously in a relationship with the British actor Rupert Friend. The actress recently completed work on JOE WRIGHT's movie adaptation of Tolstoy's epic novel Anna Karenina.