The 'Anna Karenina' actress finds it difficult to channel personal relationships but is at ease with being naked. 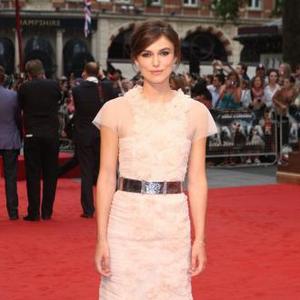 Keira Knightley is at ease with filming sex scenes.

The 'Anna Karenina' actress has learned to avoid the spotlight while off-screen and admits that she finds it easier to reveal her body than her personal life.

She told the Daily Mirror newspaper: ''I'm not prudish when it comes to nudity. If the role calls for nudity, then I'm going to be naked. I'm not afraid to Expose myself that way.''

She appears in a new film adaptation of the classic Leo Tolstoy novel in which she takes part in love scenes.

The 27-year-old star has stripped off for roles before including 2008's 'Edge Of Love'.

While she is not shy about revealing her body, Keira finds it more difficult to channel personal relationships in movies.

She continued: ''I'm much more worried about revealing personal sides to myself, which I find harder to do.

''The hardest thing to capture about love is the actual physical intimacy between two people.''

She continued to explain that intimacy isn't something two people analyse which makes it harder to use in her acting jobs.

Keira added: ''The way two people behave when they are next to each other and touching each other, holding hands, resting your head on your partner's shoulder.

''In your personal life, you generally don't think about the fact you're touching your partner. That's a difficult things to capture on film.''