Rolling Stones songwriter-and-guitarist Keith Richards has revealed he will be meeting up with his bandmate Sir Mick Jagger to discuss a new album. 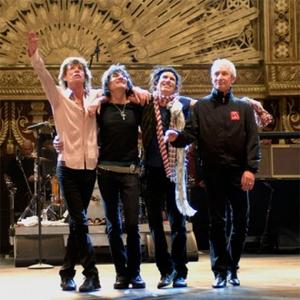 The guitarist has revealed the band - also consisting of guitarist Ronnie Wood and drummer Charlie Watts - are on the verge of reconvening to record a new LP, as long as singer Mick gives it the green light.

Discussing the group's plans, Keith said: "I don't know, I'm going to hopefully find out soon, I'm going to be seeing Mick next week or something, so I'm going to try and screw some information out of him.

"You've got to have everybody want to do it, so I usually wait for a call from Mick saying, 'Let's make something, let's do something,' because without his actual 'want to do it', then there's not much point. But I'm always working, I've got ideas for stuff, but I haven't put them together yet with Mick."

Although the 66-year-old musician is desperate to head back into the studio with his bandmates, Keith doesn't think the group will be ready to tour again this year.

When asked if there were plans for them to hit the road, he told Absolute Radio DJ Ben Jones: "Yeah, but I don't think this year, not that I've heard. The suggestion is that there would be a record on instead."

Over the years, Keith accepts the Rolling Stones have become known for their "debauchery" and "drugs", but he insists they are things which have always taken a back seat in the studio.

He explained: "Things like debauchery and drugs were really peripheral, you know, when you're making a record. I mean, they're there, they're going around, but I can't honestly write songs and make a record and debauch at the same time, you know, not even me."