Keith Urban showed off a new tattoo of Nicole Kidman's name on his arm during his appearance on 'The Jimmy Kimmel Show' last night (24.10.13). 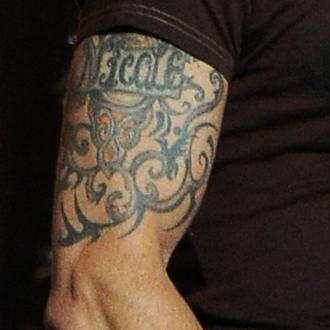 Keith Urban has unveiled a new tattoo of Nicole Kidman's name on his arm.

The 'American Idol' judge showed the ultimate declaration of his love for the actress on US TV's 'The Jimmy Kimmel Show' where he unveiled his new inking during a performance to promote his latest album 'Fuse'.

Keith made sure no-one missed the romantic gesture by wearing a short sleeved top while he crooned away on his guitar.

The 45-year-old star already had the name of the actress etched onto his right arm in script font, but now sports a re-worked version of the tattoo featuring an additional Celtic design around the original inking.

The couple - who have been married for seven years - have two daughters together, five-year-old Sunday and three-year-old Faith. Nicole also has two adopted children, 18-year-old, Connor and 20-year-old Isobella, with her ex-husband Tom Cruise.

Nicole has previously said she'd love for one of her daughters to follow in Keith's footsteps and become a singer.

She said: ''[Sunday] has really good pitch. I'd love it if she sings. The great thing about being married to a musician is you have music in the house all the time. [Keith will] play the piano at 7 a.m. ... We have breakfast around the piano.''