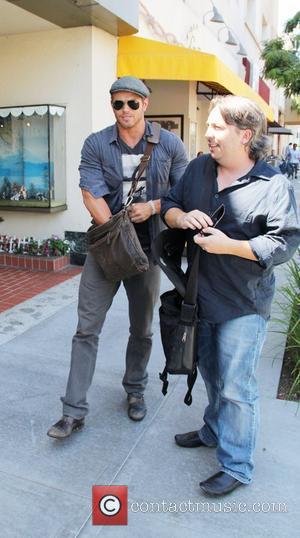 Picture: Twilight actor Kellan Lutz is seen leaving The Farm in Beverly Hills after having lunch with a friend. Lutz joked that his friend was his...

Actor Kellan Lutz and actress Lucy Lawless have paid tribute to Andy Whitfield, who died on Sunday (11Sep11).
The Spartacus: Blood And Sand star passed away at his home in Sydney, Australia after succumbing to non-Hodgkin Lymphoma.
He was struck down with the disease last year (10) when he was preparing to shoot a second series of the dramatic show, and was forced to make way for Liam MCIntyre to replace him.
Following his passing, Whitfield's wife paid tribute to her husband, calling him a "beautiful young warrior" who died on a "sunny Sydney morning" in the "arms of his loving wife".
And now his friends and former colleagues have rushed to pay their condolences.
Lutz writes on Twitter.com, "Just landed & read abt (about) Andy Whitfield passing away. Tragic, such an amazing actor. He made Spartacus! My condolences to his fam/friends. Rip."
Lawless, who starred with him in Spartacus, writes on her website, "Obviously, Andy Whitfield left an indelible mark on all of us in the Spartacus family. Andy's incandescent film presence made men want to be him and women want to marry him.
"Andy's two babies will always know that their Daddy cherished them and their mother, Vashti, above all things. How lucky we were to have him grace all our lives."
Spartacus creator Steven DeKnight adds on Twitter.com, "No words to express the depth of such a loss. You will be deeply missed, my brother."
Battlestar Galactica actress Katee Sackhoff writes, "I'm so saddened by the news of Andy Whitfield's passing. He was a great talent and a true warrior. Rip," while True Blood's Mehcad Brooks adds, "God bless Andy Whitfield. Aka Spartacus. Rest in peace."