Actor Kellan Lutz Suffered A Head Injury While Attempting One Of The Stunts On His New Extreme Sports Reality Tv Show Bullseye. 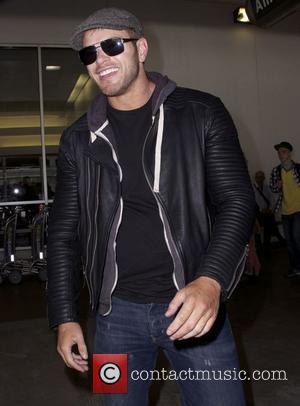 The Twilight star is the host of the U.S. competition series, which pits contestants against each other in three separate extreme stunts, in the hope of winning the grand prize of $50,000 (£31,250).

In one episode, Lutz offered to show the contenders what they were in for by performing the "human slingshot", in which they are projected into the hair before landing on a bullseye towards the ground.

However, Lutz revealed on chat show The Talk on Tuesday (02Jun15) that the challenge ended up sending him to the hospital, saying, "The human slingshot - I had to get five staples in the back of my head. Blood was like, dripping down the back of my head. And I'm like guys (contestants), 'You're gonna love this stunt!'"

Despite the injury, Lutz knew the series was a good match for him, adding, "This show is perfect for me - I love doing movies and stuff - but for the show it just spoke to me. I love doing stunts."